A brutal power play in East

It seems that some EU politicians have been setting the tone for Ukraine, notably its contempt for the elected government. Jelko Kacin, MEP and EU representative for the Balkans, stated in a TV interview, (Sarajevo) released on the 12th february:

"If you follow the developments in the Ukraine, you will see in a week or two how we treat the irresponsible political elite."

Recently, Srdja Trifkovic gave an interview on RT about the situation in Ukraine, where he mentioned: “What we are looking at, objectively, is that from the phase of demonstrations, early on, the protests had degenerated into hooliganism in mid-December, and into terrorism since January 19.” Indeed, there are reports of “peaceful” demonstrators” storming & raiding state armouries and this is despite some serious amount of appeasement from the government in the beginning of January, to stop the spiral of violence.

Comparisons have been made between Bosnia and Ukraine, even before the latest upsurge in violence in Maidan square, euphemistically labelled as “clashes” by the MSM. Former German envoy to Bosnia, Christian Schwarz-Schilling stated pretty much the same, that “a violent movement is more than likely to emerge” in Bosnia.  This was in response to the outbreak of protests in Bosnia, including Tuzla, Sarajevo, Mostar, Bihac and Zenica.  This was in an interview dated the 09/02/14 in DW. One very interesting comment (on Bosnian politicians) is:  “The politics that they have practiced must be stopped immediately. The privileges they have enjoyed for too long from old times now must be curtailed. But this would necessitate involvement from the international community. And I don’t see that coming. “ Well maybe not yet, since bloody chaos is taking place in Kiev. Not being a political expert nor have I been watching this topic, I still find that these words are remarkable & oddly similarly spoken both about Bosnia & Ukraine. Did anyone of the EU or the “international community” speak in a similar tone before the Kiev protests? Has anyone managed to catch any similar words being expressed about Ukrainian politicians back in November or before?

What kind of mind-set is at work where a democratically elected president is being told to leave & be forced out of office by the rule of armed mobs? Did anyone notice the contrast in the language spoken in Washington & Brussels about Ukraine, and that of President Morsi’s overthrow in Egypt? Obama wants the elected Ukrainian government “not resort to violence when dealing with peaceful protesters”. What about the signals transmitted by the likes of the State Department’s Victoria Nuland in Kiev, giving out cookies in December and then in her "Nuland-Pyatt Conversation".

On a side-line, it is also noteworthy, that the Bosnian riots turned peaceful after the 8th of February but the protesters have “vowed not to give up on their cause”. (Wikipedia, 2014 unrest in BiH, 2014). * It was equally amazing to hear very little condemnation of the violence by EU politicians, particularly by Ashton who said: “ The leadership needs to be aware of issues raised by people…” I suppose that’s one way of saying it. On the other hand, Croatia called for “an immediate cessation of violence”. In fact only of the few voices that spoke about the events in a rational manner was Aleksandar Vucic, “There is no need to solve political problems by setting buildings on fire, using violence and beating up police.” The British foreign secretary simply mentioned “What happened in Bosnia is a wake-up call”. Umhh, don’t press the snooze button any time soon.

The Bosnian protests are still simmering: http://www.sbs.com.au/news/article/2014/02/19/anti-government-protests-continue-bosnia. "Europe will try to use this crisis as an opportunity," a Western diplomat told Reuters and others are trying to pin the blame on the Dayton Accord. The greatest hypocrite must come be the Turkish foreign minister, (who was in Sarajevo on the 12th February) who said: "Today is the day to act in Bosnia and we must not wait any longer.” This is the foreign minister of a country that has its own regular protests, who are getting hosed down with water cannons and tear gassed; where peaceful protests last year ended in violence and bloodshed.

3. Malevolence from the West

Cynically, this is just one element of a long power play, at times very brutal, highly vindictive in nature, which is progressively going towards Russia’s door. Take note of this comment in the UK’s Guardian: “The result is a deepening of the crisis that will affect not only the fate of Ukraine, but that of Russia, the European Union and the United States.” It potentially gives the EU, & the USA the opportunity to move in and break the “old regime”, change habits and re-mould the Ukrainian political landscape into its own image. (Cue Serbia, Georgia, Ukraine x1, Egypt x 2, Libya and an attempt on Syria).

Some may wonder why another red line is being drawn. A possible clue is  that Ukraine exports Russia's natural gas to Europe.  The areas in which the pipelines are located are also the areas that are out of reach of the Ukrainian government's control.

Similar words are being spoken about the Bosnian political elite too, but no red lines as yet are drawn, just being talked about at the moment.  The question for how long?

Delegation for relations with Albania, Bosnia and Herzegovina, Serbia, Montenegro and Kosovo (and guess where else?) Ukraine and Iraq: http://www.europarl.europa.eu/meps/en/23691/JELKO_KACIN_home.html;jsessionid=F20FB9B5FEB5BCE4D0BBF8FD5C5FB3FE.node2

The original video is: http://www.youtube.com/watch?v=YDigGyhhlw0&feature=share&list=UUGySVuPJyGOnRSRegCsIICQ&index=1 (from 15:25 onwards to just 16:00), published on the 12th February.

A transcript of a video interview with Srdja Trifkovic: http://www.youtube.com/watch?v=YKkiazCsZ8M www.dw.de/bosnia-its-just-like-ukraine/a-17420506

* (Historical archive documents were destroyed during the rioting, possibly of significant interest).

http://www.theguardian.com/commentisfree/2014/feb/19/ukraine-repercussions-world
Posted by Unknown at 2:14 PM No comments:

You Can't Save the World

You Can't Save the World
Posted by Unknown at 2:11 AM No comments:

opening doors to the plight of Christians in peril

Let's have more of this right across Europe and elsewhere. VISIBILITY. These events were organised by the charity Open Doors. HOW? Well here's a start?

HELP with their work in Syria:
http://www.opendoorsuk.org/campaign/savesyria/forms/signup.php?src=footlnk

Posted by Unknown at 1:37 PM No comments:

Being a Copt child in Egypt

Cyril Rif‘at Fayiz from the Minya region in Egpyt was kidnapped by “unknown persons”. A ransom of early the equivalent of $150,000 USD, was later demanded by his captors.

Why? Because he just happens to be a Copt, a Christian, one of millions living in Egypt, under the thumb of Islam since 642AD. Seen as second rate citizens, which is convenient for others to harass, kidnap and murder with impunity.

Here is something that I did a while back:  Ok no MB in power but still that doesn't that the Copts are safe, Islam is Islam and will subjugate and repress others. 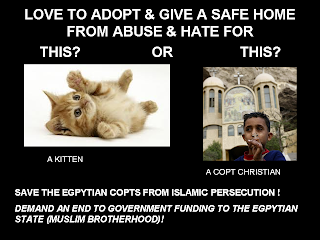 Posted by Unknown at 1:01 PM No comments:

http://www.israelhayom.com/site/newsletter_article.php?id=14755
Escape from Gaza and hate, now Jewish.
Story one


And on a side note, in the West, the mainstream media regularly disparage Israel for its "bad human rights" towards the Arabs.  When I say, vanity, it is because it is their warped pride of having been defeated by the Jews, while trying to overpower and destroy the state of Israel, in 1948,   (1967, 1974).  But that's not what all it seems on the ground, judging by:

Notice the lack of empathy, the blatant manipulation of entire generations by Arab countries, a vanity exercise with the result:

Syria and Lebanon are among the Arab countries that declined to accept Arabs from pre-state Israel as citizens, insisting instead that they - and their children, grandchildren and all future descendants – remain known as “refugees” with the right to “return” to Israel.

The other slave trade